A Place for Dreaming

Crossing the Nepal border from India on a bicycle rickshaw was pretty cool. . . even after an overnight train from Goa, a scathing visit in Delhi, another over night train to Gorakhpur, and then a 3 hour local bus ride to Sunauli.  We got to Nepal exhausted and starving, wondering where to go next, and stopped for our first meal.

Mo-mo’s and chow mein are staples in Nepal.  The vodka is questionable, but it is available everywhere, and after a 1700 mile journey to get to this exact moment, we deserved every drop.

After dinner, we decided to go to Pokhara.  Besides, what was 8 more hours on an overnight bus, anyway?!  Clocking so many hours in so little time, our rating on the Hardcore Richter Scale just kept going up.  Booyah!

We caught a local bus for 375 Indian rupees and scored the best seats.  Loud Nepali music blared through the speakers, and despite the bumps and the laughing, I slept for most of the ride.  We left the border around 8pm and arrived in Pokhara at 5am the next morning.

It was cold.  Real cold.  In fact, when the bus stopped, I could see my breath and didn’t want to go outside.  Brrrrr.  Coming from Goa in the 90’s just less than two days before, it was like going from the height of summer to winterrrrrrrrrr way too fast!

I put on most of the layers I had with me in my small backpack before venturing out into the cold morning.  It was still dark and too early to go to any hotel room, so refuge from the frigid air was a frivolous desire.  The only open thing near the bus stop was a small place that served chai.

We walked in and sat at one of the five tables in the place.  It felt like night.  A man stood next to a small fire near the front entrance making chapatis and chai.  There was a quietness in the cold air, but it wasn’t desolate, it was more Zen feeling.

A young boy brought two cups of steaming, hot chai to our table.  The steam, like the breath of tea, was one of the only visible things in the early darkness.  I noticed two men sitting at another table–dressed in heavy jackets and scarves–bundled up appropriately for the weather, but wearing flip-flops on their feet.  They sat quietly hunched over their cups.

I was quite perplexed that the windows and door to this little hole in the wall were just open.  The doorway didn’t even have a door, actually.  It made me wonder why they wouldn’t want to close the space to conserve heat of some kind.  Who the heck wants to eat or drink in a place that’s outside in winter?  Nepali’s are tough.

We got two more cups of chai to kill time and borrow warmth, and after an hour, we took a taxi straight to our room.  We crashed hard and for many hours. 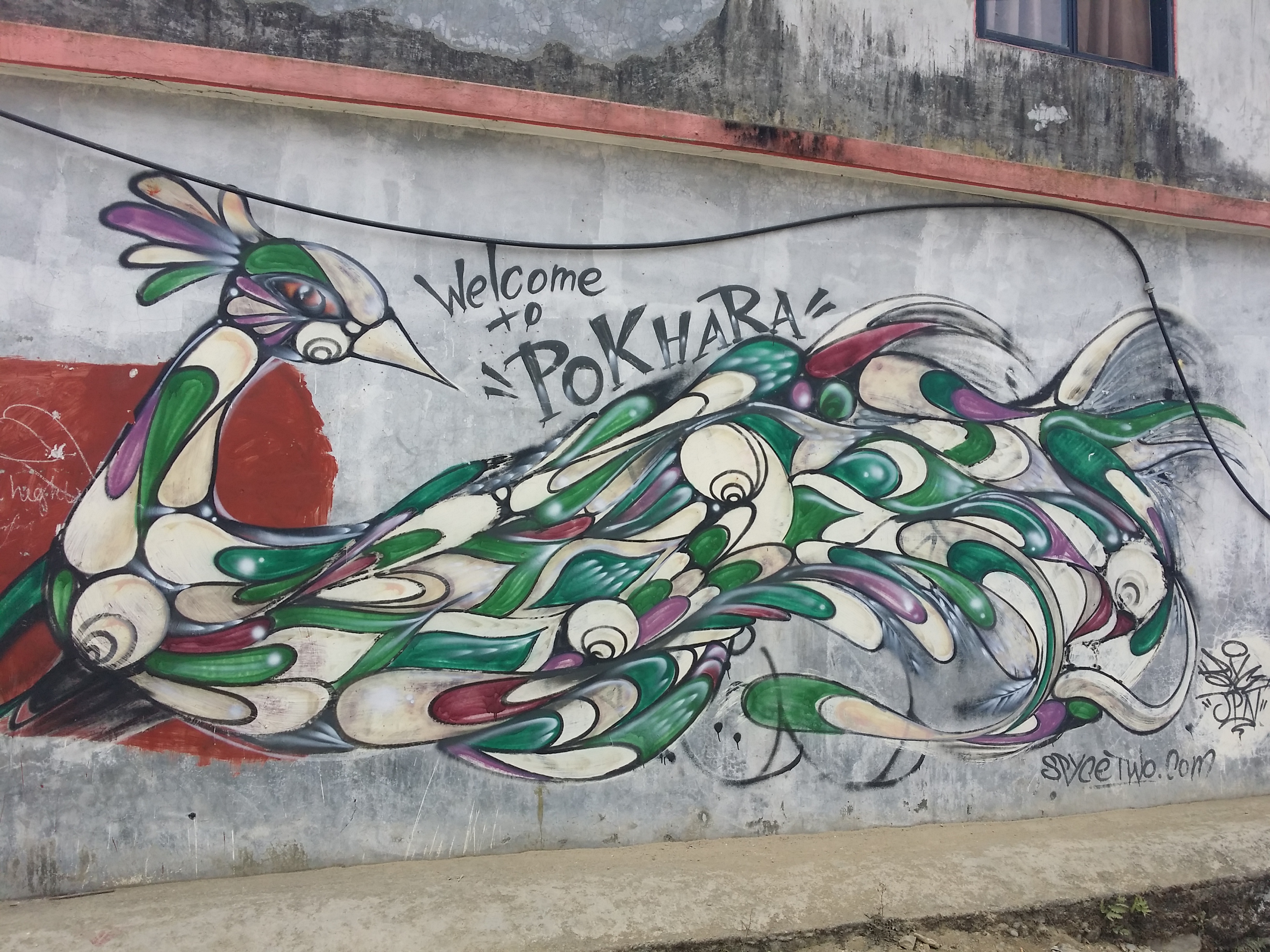 Pokhara is a pretty mountain town surrounded by the Himalayas.  It hadn’t rained in weeks when we were there, so the sky was too hazy to see any of the great mountains in the distance, but we still got gorgeous views. . . and a decent latte!

The town is set next to a mystical lake.  It looks like the Lochness monster might lurk in the waters and, if you’re lucky, you might just see the tail hidden in the fog that hovers above the surface.  There’s a windy dirt road that traces the contours of the lake, stretching for miles from the city out into the small villages. 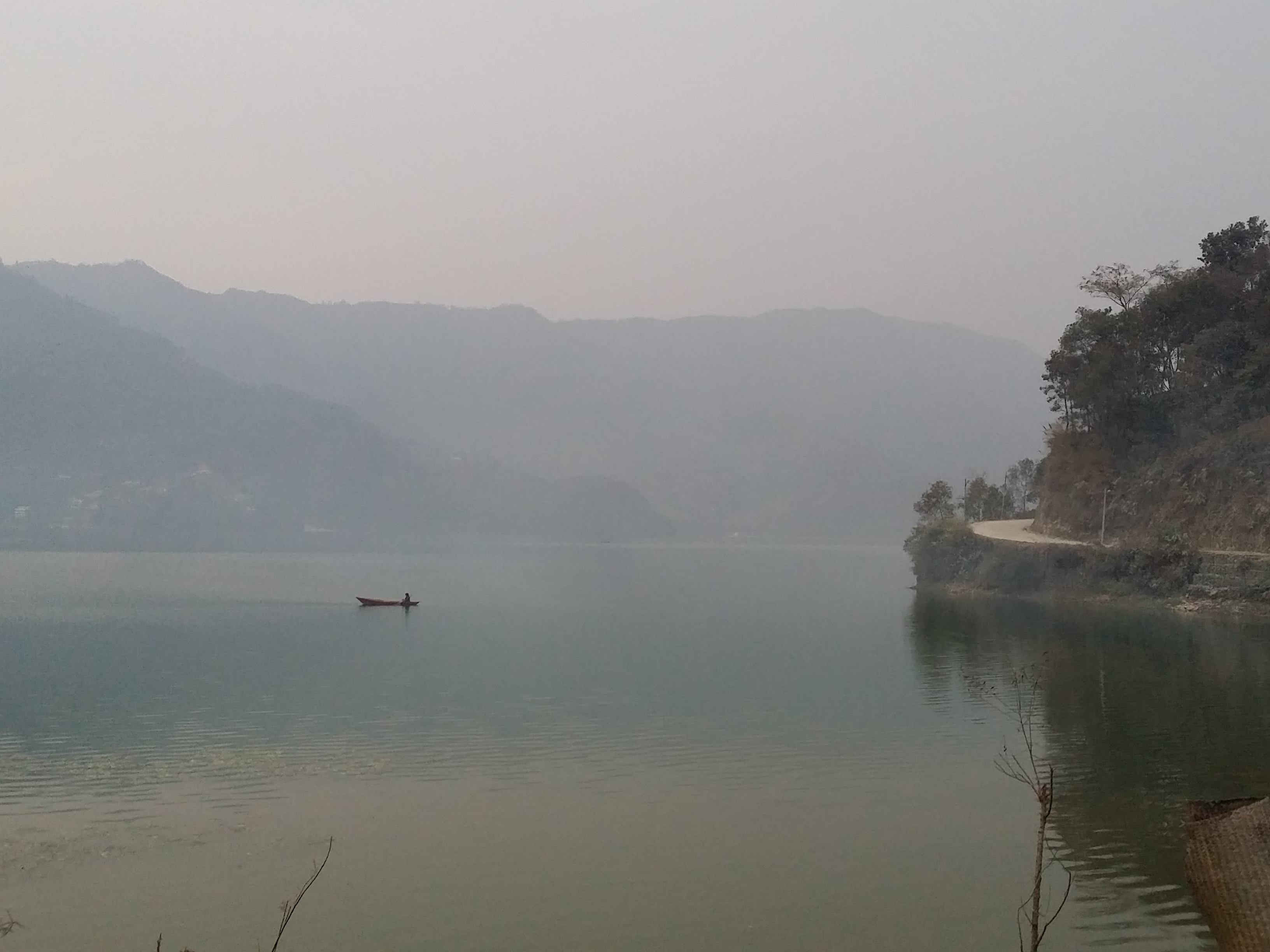 We spent a couple afternoons walking along that road.  The pastoral landscape was beautiful from afar. . . . and it was so peaceful bumbling along the countryside.

On our way back into town, we caught a fantastic view of a bus.  Some things are so similar to India.  Don’t you just love it?! 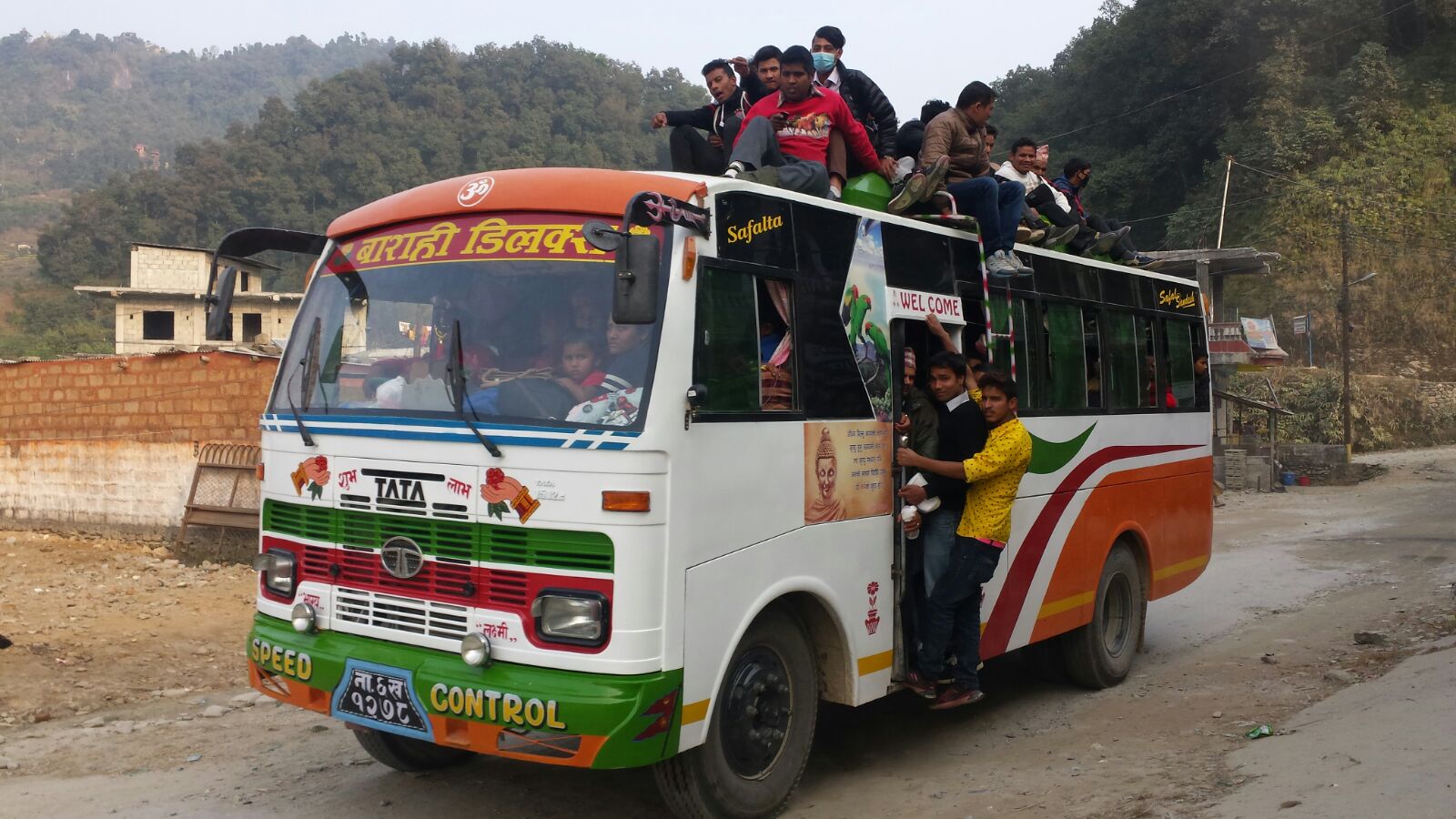 I found Pokhara to be filled with heaps of cool street art–murals, graffiti, mandalas.  And the people?!  So lovely.  So happy.  And so very little. . .especially the women.  Unlike places in India, I noticed a lot more women in Pokhara running shops, restaurants, guesthouses.  They seemed to have a dominating presence on the streets–all huddled together in different turfs talking about the obligatory gossip, I’m sure.

Our first night we got lucky and stumbled upon happy hour at a bar across the street from our guesthouse.  We didn’t even know until we ordered two drinks and the waiter brought out three?!  We thought he either got the order wrong, it was going somewhere else, or we had an unexpected guest. . .but it turned out to be the deal of the evening: buy 2 get 1 free.  Okay, twist my arm.  Now, give me three more!!  And did I mention that I got 106 Nepali Rupees for ONE US dollar?!

After a few days of wandering around the city, we made friends with a very special little baby named Rocky.  He was hairy, stinky, and almost too cute, but we went to visit him every day we were in Pokhara.  We actually both got sick from the extreme weather shift, and spent a lot of time in our room drinking ginger lemon honey tea, but we made it out at least once a day to give Rocky a banana.  I think he gave us therapeutic cuddles, too, so he wasn’t the only one benefiting.

We adopted a place called Cafe Europa as our main eating spot.  It had four tables, cool murals, and one of the most fun, sassy ladies in town cooking.  Everything Lakshmi made was from scratch right in front of us and it was delicious.

Lakshmi was around 25 years old–married at 13–with long black hair and a Marilyn Monroe beauty mark by her left eye.  She would dart back and forth in the kitchen saying nonsensical things, all with a big smile, and if we said anything to her she would reply, “I cooking you looking!”  And if we ever asked her for anything she would shoot a naughty grin, with one hand on her hip, and say, “Not possible!”  But it was always possible.  Sometimes she would say “Not possible” at the same time she was doing the impossible thing.

“La, la, la,” was another one of Lakshmi’s sayings.  She would say it really fast in the space of a verbal pause or even totally at random.  It was like whimsical Tourette’s and it was kind of hilarious.

Lakshmi’s son, James, liked when I took his picture and was very confident as he pointed and directed me on how to photograph him.  This particular day he was grounded from not coming home the previous night, so he had to sit in the restaurant all day in Lakshmi’s sight.  He sat quietly in the corner table staring at the kids playing on the street.  I could tell by the look in his eyes he knew he was wrong, but he didn’t regret it one bit.  Whatever fun he had was worth the day of sacrifice. 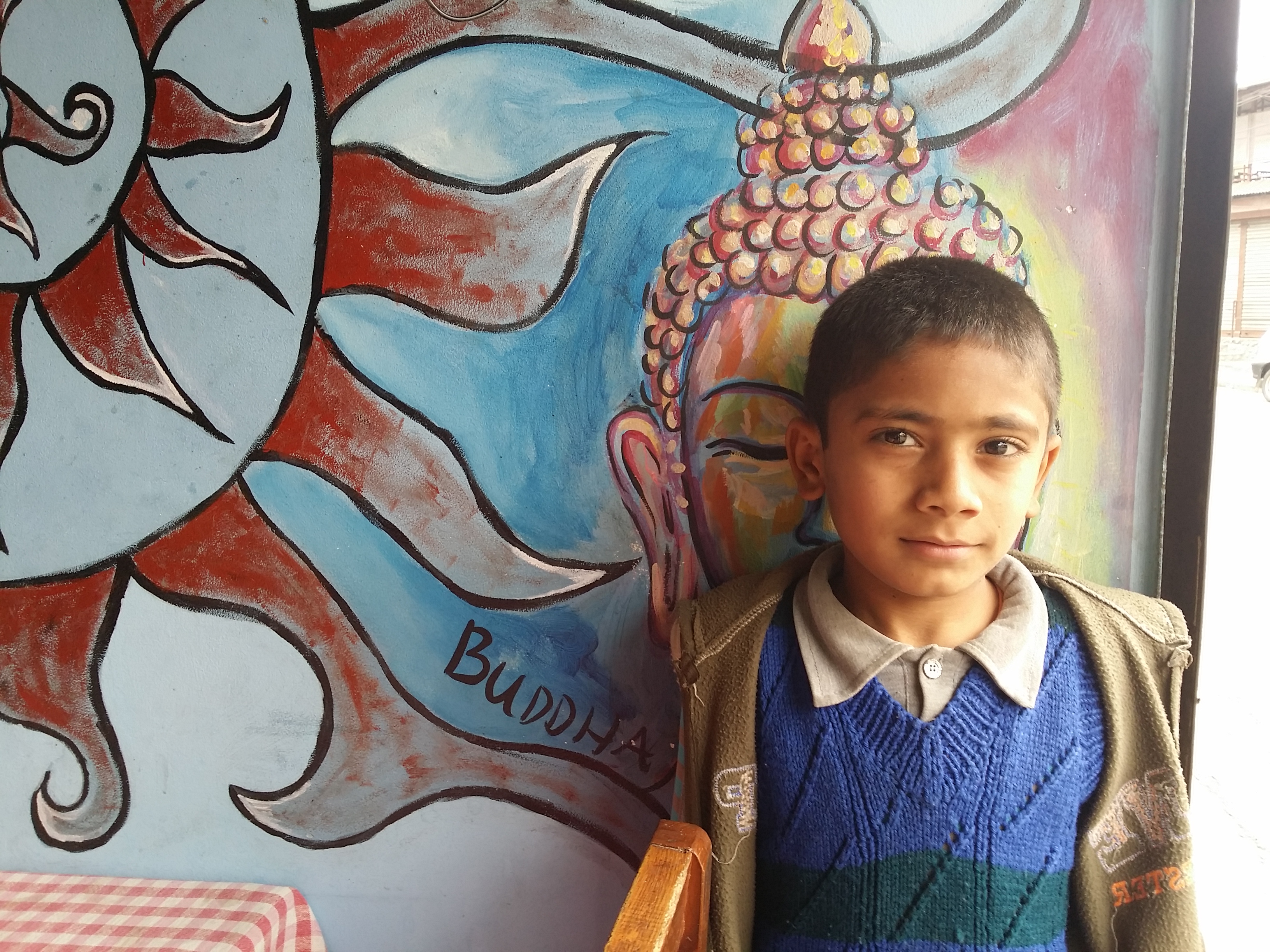 On our last night in Pokhara, we brought a bottle of whiskey to put in our ginger lemon honey tea.  Lakshmi was in her usual spunky spirits and gladly accepted when we offered her a shot of whiskey.  We didn’t know, but soon found out, she liked to drink!  Heh.  After the first shot, she came to our table, “la, la, la,” and our bottle of whiskey magically disappeared and ended up next to the chopping board in her kitchen.

Before we knew it, a whiskey party was happening.  Lakshmi’s husband and one of his friends came and the shots continued. We even made friends with a lovely French traveler who joined us for a few rounds.  I then got ordered to go into the kitchen and make my own ginger lemon honey tea, so I told Lakshmi, “I cooking, now YOU looking!”  We both laughed and hugged.

The next morning, we packed up our room and said goodbye to Pokhara.  But this time, instead of taking two locals buses and then trying to catch a train in Gorakhpur, we opted for the cheap, masochistic single bus option. . .THIRTY-TWO HOURS, 680 miles, straight from Pokhara to Delhi.  Duuuuude!

Since we took a night bus on the way to Pokhara, I was excited to see the landscape on the way back.  We didn’t get the best seats for this round, but had the funniest Tibetan neighbor in our row.  He had long hair and deep life lines carved into his tan skin.  In his right ear, he wore a turquoise and coral earring.  I didn’t get his name, but his smile was good enough.  I knew we were kindred spirits when the bus hit such a large bump we went flying into the air. . .me and the Tibetan friend laughing like maniacal teenagers, smiling at each other, reveling in our mutual joy.  Truthfully, the bus ride was so bumpy I wished I had packed my sports bra!

The countryside views we flew past were like post cards.  Some of the landscape looked like patchwork quilts of bright green and brown squares, sewed together by yellow and purple floral thread.  Multi tiered hills, rope bridges, goats, dogs, and mint green rivers whirled by.  It was poetry in motion.

Several hours later, we stopped for chai–although they call it “milk tea” in Nepal.  We were definitely far away from anything and the people were entertained by my presence.  The woman making tea was using a cool, clay stove, and she smiled as I sipped her brew.

The journey to Delhi was long and funny.  There were so many older Tibetan women on the bus and they kept making the driver stop so they could pee.  Now, we were in the middle of nowhere for most of the drive, so the driver would just pull over anywhere.  The men would go in one direction and the women in the other.  I thoroughly enjoyed my strange bonding time while squatting, even though none of us ever said a word, and I felt very blessed to share such moments in this beautiful land.

Until next time, Nepal!  Namaste!